Teaming With Success in Toastmasters! 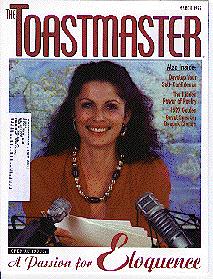 In our clubs, districts and world at large we are surrounded by examples of great (and not-so-great) teamwork.

Recently I flew to Los Angeles, visited relatives, took in a parade with floats, bands and street performers, saw a football game and attended an opera. Countless teams made it all possible, whether on stage or back stage, seen or unseen. As a Toastmaster you too are a part of a variety of teams. How well you work together tells me how successful you are.

Are you teaming with success?

True teamwork takes time and a willingness to contribute to the greater good of the team, as opposed to only looking out for number one. It begins with a desire to work on behalf of the group. Examine your motives. In successful teams, when the teams win their teammates too reap the rewards. Ineffective teams are often betrayed by selfish team members whose individual goals supersede their team’s goals.

Among the hallmarks of effective teams:

I have chaired boards of directors, coached basketball teams domestically and internationally, and managed talented, and not so talented, groups within and beyond high-tech. I know from experience that lines of authority alone do not guarantee dedication, loyalty and a shared sense of team play. Similarly, I have been a member of functional and dysfunctional teams and have seen first-hand that talent alone doesn’t guarantee success. Successful teams are about a coming together of talent, a melding of minds and mindsets, and an ability to focus on the big picture.

These can all occur on well-led teams, without sacrificing the team spirit. It’s a mistake to believe that the best team leaders treat everyone the same way. Realistically, not everyone wants nor needs to be treated the same way. Some team members are self-motivated. They are self-starters who want the keys to the car and then ask that you step away from the curb. Other team members want and need reassurance, support and a little hand-holding. Neither is right nor wrong. But each excels when treated the way they most want to be treated.

Team leaders should strive to achieve the following:

As an only child who once thought the sun revolved around the son, I benefited greatly from team activities:

Yet it was as a servant leader in Toastmasters that I learned my greatest lessons as a club, area, division and district leader:

Having had the pleasure of serving on guidance committees for several High Performance Leadership projects of others I’ve learned about acceptance and humility, open-mindedness and how cooperation trumps competition amongst team members.

Teamwork, among any group, is developed over time. Day by day your club or district team can strengthen itself through experience and the natural relationships that occur over time. With time and attention to these tips, soon your group will be teaming with success!

It’s time to apply your burgeoning teambuilding skills. When you complete assignment #10 from your Competent Leadership manual you’ll have utilized your team skills to successfully lead within Toastmasters. Opportunities abound within and beyond your club: as a Toastmaster or General Evaluator, as Chairperson of a contest, membership or PR campaign, or special event, or in other capacities too. Indeed the world awaits your team building skills as a leader.